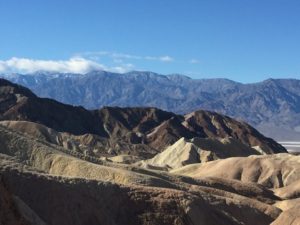 I have a  friend who lives year round in Death Valley.  At 282 feet below sea level, it is one of the most spectacular places I have ever visited. The color of the 11,000′ jagged peaks spans a spectrum  I never knew rocks had. When the sun dances with the shadows around the expansive desert valley it can take your breath away. I have seen it rain in Death Valley with heavy  low clouds hugging the mountains.  I have seen the desert explode in flower blooms and yes, I have even seen snow on the peaks.

For the sake of anonymity, I will call  my friend  Death Valley Girl or DVG. Ironically, she likes to ski. DVG  described what it’s like to live in a place that reached 127 F (52.7 C) for 4 days in a row this summer, and holds the world record of 134 degrees F.  This July was the hottest month on record, which got scientists to extrapolate  that summer in the park will be too hot for humans to handle.

Death Valley is in danger of becoming uninhabitable.

Most of us probably read that story while  in an air-conditioned space, or if you were lucky, on a deck with a cool breeze and a beverage on ice.  My friend, DVG, was in her office with an air conditioner struggling to keep her office cool enough to be safe.  An electricity brownout  or blackout would be life threatening. Friends who travel to Everest wear enough clothes to be safe. The problem with too much heat is that you can’t take off your skin.  A short  walk outside at 120 F  is unsafe. At that temperature your skin burns and turns red almost immediately, even in the shade (a rare steak has a cooked temperature of 125 degrees F). Heat stress is almost immediate and can last for hours once you return to air-conditioned space.

Scientists warn that Death Valley will become the norm: large portions of Earth will become too hot for human habitation during the summer months. Let that sink in for a moment. Yup, humans will need to pack up and head north (or south for those down-under). But, the millions of people who live in the tropics and desert regions can’t just become “Sun Birds” (my new nickname for the those who have the means to migrate during the summer versus “Snow Birds” who migrate to Florida, or AZ in the winter). It takes resources and a destination to make this possible.

On August 11th Glacier National Park recorded the first 100 F day  in West Glacier since official observations began in 1948. And then the fires began. BTW, The average July temperature in Death Valley is only 116 degrees. Only 16 degrees separate one of the hottest places on Earth and Glacier National Park, or as James Balog calls it, (soon to be) Glacier-less National Park.

It’s hard for most of us  to connect to events around the world and understand the new warmth that each and everyone one of us is contributing to. Warmth that is quickly becoming the new “normal”. We connect to horrific events we’re seeing this summer if we have been there, know someone who lives there, or if it is our home. But you ARE connected.

Remember the game Six degrees of Separation with Kevin Bacon?  Somehow we are all connected to Kevin Bacon. I am 3 degrees  from him. (Footloose will always be my favorite). In fact, six degrees connect all of us on Earth.

Several weeks ago I had the chance to chat with my friend and COO of Green Alpha. We had a blast. Here is the entire interview:     Green Alpha’s COO, Betsy Moszeter, and Catherine Greener work together on the Board of Directors for The Alliance Center. As they work together to further the organization’s mission and provide… END_OF_DOCUMENT_TOKEN_TO_BE_REPLACED